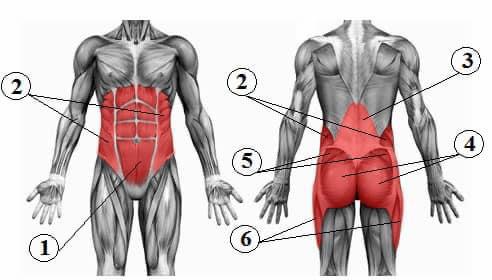 Definition with which Pilates described the "house of strength", the nerve center from which the force that moves the whole body is released, that is the area that goes from the lower part of the rib cage to the lowest portion of the pelvis, therefore the muscles of the abdominal, lumbar, diaphragm and buttocks area.

This original definition coined by Pilates, which I really like to underline, since it is simple and effectively descriptive, has more recently been joined by the word Core, not only in Pilates but in sports terminology in general. Often for explanatory reasons the Core is described as that ideal belt that wraps the waist around the iliac tops.

Although this visual association is useful in classes in order to help practitioners empathize with that part of the body, this description (which I do not consider wrong anyway) in relation to modern knowledge in the field of physical exercise, could seem reductive. Instead, we could describe the Core as that region of the body formed by two muscle systems: the stabilization system (muscles of the Core / Power House area), the movement system (global musculature).

The muscles responsible for stabilization are: the transverse abdomen, the pelvic floor, the internal oblique, the multifidus and the transverse spinal lumbar.
The muscles responsible for movement are: the rectus abdominis, the external oblique, the spinal erectors and the quadrate of the loins, together with other muscles that interact with the core, such as the adductors, the quadriceps, the hamstring and the gluteus maximus, as well as the ileum psoas . The diaphragm plays the role of coordinator between all the muscles of the Core region, especially between the transverse abdominis, pelvic floor and multifidus, for this reason its location is physiologically present in both systems (stabilization and movement).

Based on the above, I like to define the Core, as that central area of the body that interacts harmoniously with the other muscle areas based on the movements (and the intensity of these) performed.